To-day I am making an Ode to Art and here I am featuring two Artists that I know: The Hardest Working Man inside of the realm of Cardboard, the Cardboard King and Mister Eric Legee! Both of these Fellows have been at an event called the Doo-Nanny, which is the World’s Preem Ear Lo-Fi Festival and We are in a count-down to that, just one day longer than the 28-Day Sketch Challenge (of which this is the last day). I’m-a keep on Rockin’! This has been the 28th Day in one row, of drawings by me, so far.

and the next Arts Ode is comin’ in with a Minister of Intertwanelism and current Resident of the Candlertown ArToREtuM, Mister Doctor Professor, Robert Frito Seven. 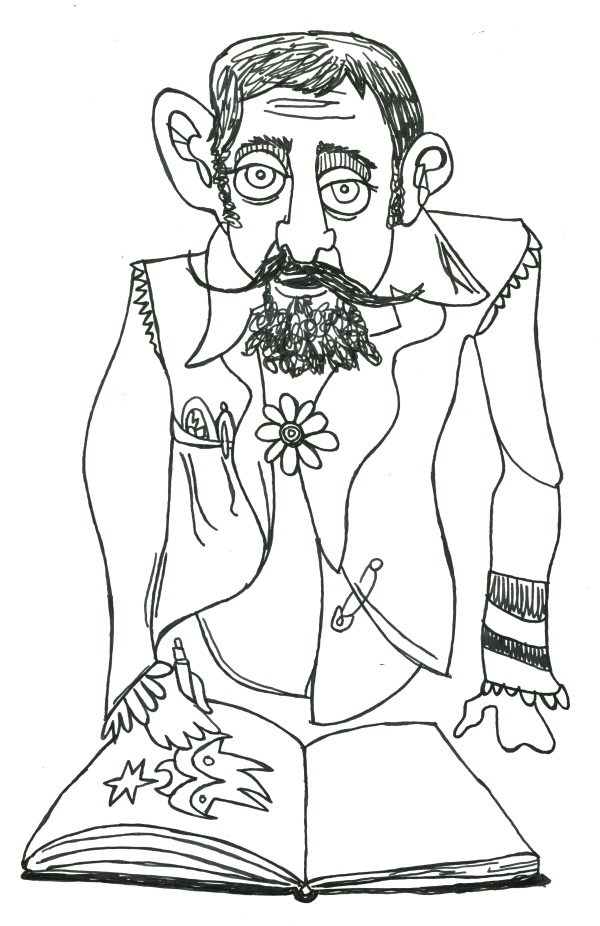 At 2am, time for an Auto-portrait after the Show is over. Here I am in circa 2002, possibly in Bristol, TN/VA. I still have this jacket, no sleeve-less. Off We go!

Here I am in 2001 or 2002, sitting on my porch in late November. I was a warm day, I remember. Irie member. I saw myself reflected in a spherical object that was shiny, a novelty tiki torch.

recited Live on the radio in the Netherlands in September, 1999:

Georges and the Dancing Dish and Sausage Vision.

Over Mountains and Seas and some Oceans and some Land, came an Ageless, slovenly, grape-stained Man. He had learned a special skill that would set Him free, baking cakes and breads and small past-er-ies! He sought to set sail with His baked goods on the Ocean blue, a fortuitous and triumphant deed to do, but He was tricked out of His goods by a coniving Platapus, named Dexes. Even though He lived forever, this is when He should have died. He squashed ripe grapes against His tunic, brand new, this resulted in delicious and fermented residue. He guzzled it down and moved into a Cottage, this went on for many years and it cause Him brain-rottage.

Georges was a man, slovenly in a grape stained tunic. He had lived for some time in a Cottage in an enchanted Forest. The Cottage, which was built a long time ago, and had figured prominently in the development of the Cottage Cheese Industry, had a magnetic rooftop. The roof affected Georges in a most peculiar manner – he would have visions of a beautiful, golden Fish speaking in a British Accent, or of crazed conniving Platapi (to use a form of pseudo-Latin). Worst of all, when He had almost organized a personal history out of the encircling madness, He would return to the Cottage and have his memory, once again, erased. Understand; Georges would have a bank of memories stored up… then when in, under the roof, the Magnetic-field would cause a reaction in the Subatomic system of Georges’ brainstem, and cause His aura to fragment into bits of light… thus His memory would lapse. He would sit beneath an ancient gnarly tree, eating kippers and capers out of tins with Hygienic hardwood. One day – during his usual sub-arboreal routine, he was visited by creatures the likes of which he had never seen: a Dish and Sausage – from the Island of Slaam, appeared to Georges in a desperate attempt to evict him from the infinite repetitiveness of returning to the Cottage, forgetting everything and then having to start from scratch. These normally inanimate items, had prepared an interpretive dance for Georges. The Dish began spinning wildly, while the Sausage, dressed in his native attire and dripping flavorful juices, recited a short epic Poem depicting the nomadic adventures of an ageless, slovenly dressed Man from the dawn of time. Much to the chagrin of and not for lack of trying, the Dish and Sausage failed to have an impact on Georges. He returned, more befuddled than normally to his magnetic-topped Cottage. Four-line Poem to sum up: He eventually leaves the Cottage, you see – and sailing upon a small Skiff, lands upon an Island where he performs his one triumphant deed – this time plagued by visions who mean to disrupt his concentration: a Cottage in a Forest of endless Anon. Rising up from his stupor and wielding his hardwood, Georges grabbed the Dish and upon it, with precision, dissected our poor, dear Sausage – much to his gastronomic delight.

This here is a Funky Freighter that I saw steaming by one day. I’d like to be up on that bridge, shouting “Full Steam Ahead! and Take Us to Space, Mister Sanders!”, et cetera. Ahoy, Oh Boy! This is a Ship that passed close enough and slow enough to catch a quick sketch, off the Westernmost Point of Negril, Jamaica. I later embellished it and now I’ve done a Pen and Ink drawing version as You see here.

the Messenger of the Ages rides a UniverCycle (I’ve made up this term, I know that it’s got some obscure name I can’t remember). I found an old drawing of this image and brought it up-to-date with a little pen and ink over a pencil REdraw. My submission for day 25. The Messenger of the Ages is a recurring Character in my Life and Dreams. I saw an actual Human on a bicycle that originally inspired His creation. Sometimes He is referred to as the Guy from the Universe and his tagline is: “How’s the Mystery Work coming?”. It is said that He brings ecstatic bliss to all Beings.

Final of the entire series, just a silly little drawing of AK Lorraine wearing Her Birthday Hat, which differs greatly from a Birthday Suit… 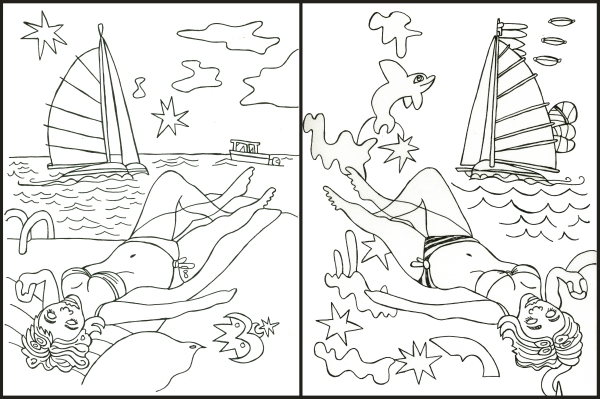 For one of my last images of the AK Lorraine Birthday Week series and the 24th day of our “Sketch” Challenge (I assure You, these all began as sketches), I give You a Sunbathing Study. I am fond of studying Sunbathers and Their surroundings, and luckily I had a willing subject (it’s always best to receive permission before even sketching sunbathers). 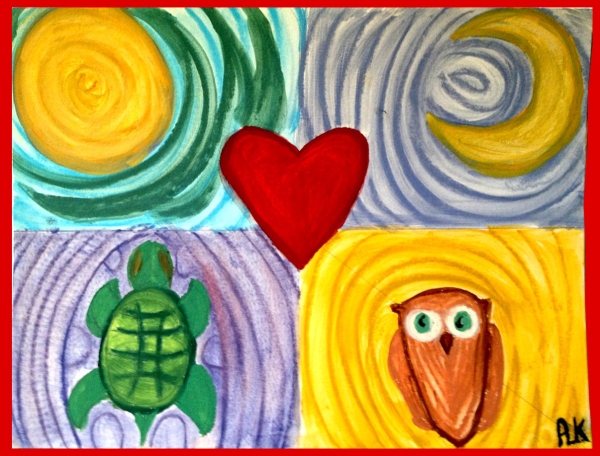 I love this painting I received from AK Lorraine, it features the Sun and Moon and a Tiny Turtle and an Owl, with a HeArt in the center to connect it all. 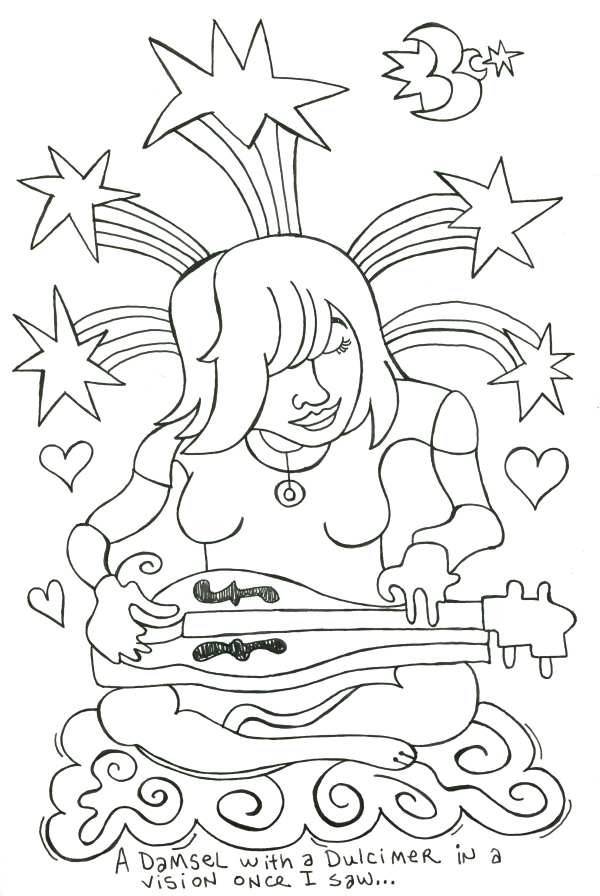 Number Day Six in the week of AK Lorraine-featured Arts. Here is one that actually also happened  and makes me think of a line from one of my favorite all-times Epic Poems: Kubla Kahn by Samuel Taylor Coleridge, 1797: (paraphrasing) “A Damsel with a Dulcimer in a vision once I saw, She was an Alamance County Maid and on Her dulce de Mer She played…”