My Friend Meredith DiMenna is performing at the Cutting Room in New York City Tonight!

I had a whirlwind Trip to the chilly Northeast, which turns out to be similarly chilly to my home in these Blue Ridge Mountains. I had a great time with Two of my Fellow Creative Collaborators, Meredith DiMenna and Emil Nomel. We saw a lot of amazing Art in Bridgeport at the Art Trail there this past weekend and met some very interesting People. I enjoyed, again, the Northern Hospitality, which is very generous. The Folks up there are interested in the Arts, both Fine and Folk.

We took a trip into Brooklyn and met with Our friend Jay Sanders, who is spending a month in New York City, getting a feel for the place. Jay had two other People with Him, one of Whom was a Friend from my College Days that I hadn’t seen in 23 years. We ate at an amazing Thai Restaurant there called SEA and then went to hear some Live Jazz at a tiny club.

We went back to Norwalk, CT, after that and the next day, a Monday, We took down the large Painting “the Earliest Days of the Miracle Wave” which had been hanging on the side of the Nest ARTs Factory since Saturday. We had tried to take it down, or considered taking it down on Sunday but a chilly rain was falling and it didn’t feel right, so We went to look at Art instead. Finally that large piece was safely scrolled-up and put away and then We went to enjoy a Brazilian Bar-be-Que for Lunch, then We returned to Flavor Bay to decompress before I had to leave and come home. Tuesday morning,

We rose early, my alarm went off at 6:00am and We promptly left for the Train Station. I got on board at 7:16am and We were off, zooming through the snowy woods, headed for NYC. Soon, though, the Train came to a stop in North White Plains, NY. They came on the loud speaker and told Us that the Train would be delayed “indefinitely” due to a Fatality on the Tracks ahead. Suddenly, masses of People in striped shirts and suits were exiting the Trains from all directions and leaving in Taxis. I waited on the Train after consulting with Ms. DiMenna via hand-held cellular device. After about 45 minutes, the Train was moving slowly and it quickly reached 125th Street in Harlem, where I got off and tried to get on an M60 Bus for LaGuardia Airport, the Bus, of course, does not take Cash, only coins or a Metro Card (which I knew because my friends had told me), so then I ran three blocks to get the card in a Subway, then I raced back up from the underground into the chilly, grimy, gray New York Streets and immediately boarded a Bus. After a few tries I got the card to go into the thingy and We were off. The huddled masses were packed on to the accordion Bus and it slowly made its way to the Airport, stopping every half-block to let Little Old Ladies on and off.

Thanks to a very helpful Delta Employee, I was directed to the proper Terminal and to the Ticketing section, where I actually worked a self-help kiosk and got into the security lines. I spilled out on the other side, carrying my shoes, my cell phone, my currency and passport, three jackets, laptop computer and suitcase and went straight to a coffee stand. I grabbed my hot coffee, spilling only about a third, there was no cream, so I took whole milk, then hoped with untied shoes to the Gate where my Plane was boarding. I got on the plane and We back up and slowly cruised to the 18th place in line (due to delays caused by “Snow”, of which there was the tiniest dusting). After about an hour waiting there, We took off and flew to Atlanta.

When We landed I immediately called Delta and found out I had been bumped from my original Flight, and was now on an 8:00pm flight. I was supposed to land in Asheville at 3:00pm, my Friend and Colleague, Bob Seven was already waiting at the Airport, there, so I asked if I could be placed on an earlier flight. The Lady told me there was a 2:21pm flight but I would never make it, as I was still on the plane and the People were unloading stuff from the overhead bins as if it were the first discovery of overhead bins… I said “I will make it, just get me on that flight!” so She did and I finally got out of that Plane and ran, like a Madman through the B Concourse, down an escalator, onto a Train back up a next escalator and all the way to the end of the C Concourse, to Gate C42, just as They were closing the door. Somehow They let me on and I found a whole section on the Sardine Plane to Asheville by myself, which was good because by then I was steaming from having run so far dressed in my full Winter Costume.

I landed promptly at 3:15pm and was picked up by my Friend there and We zoomed back to Woodfin, to the Logdove Saints International Home Office, here. 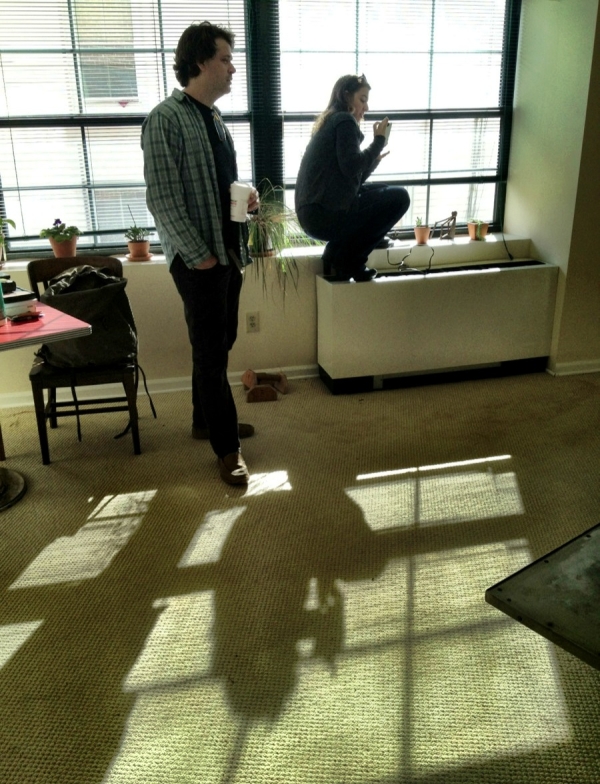 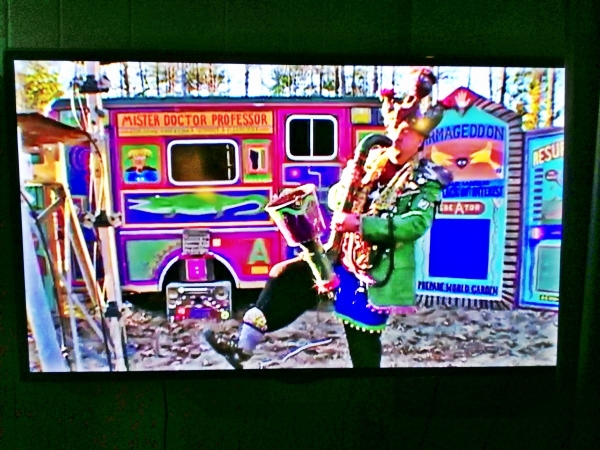 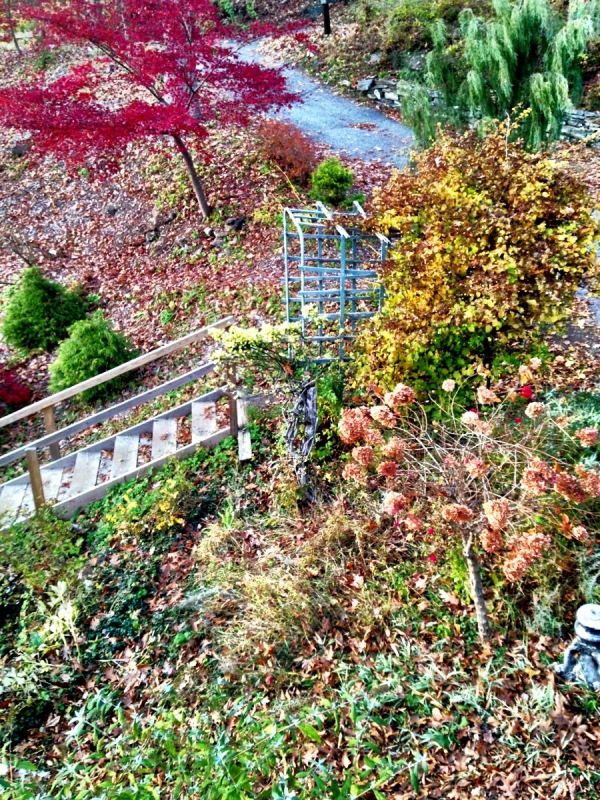 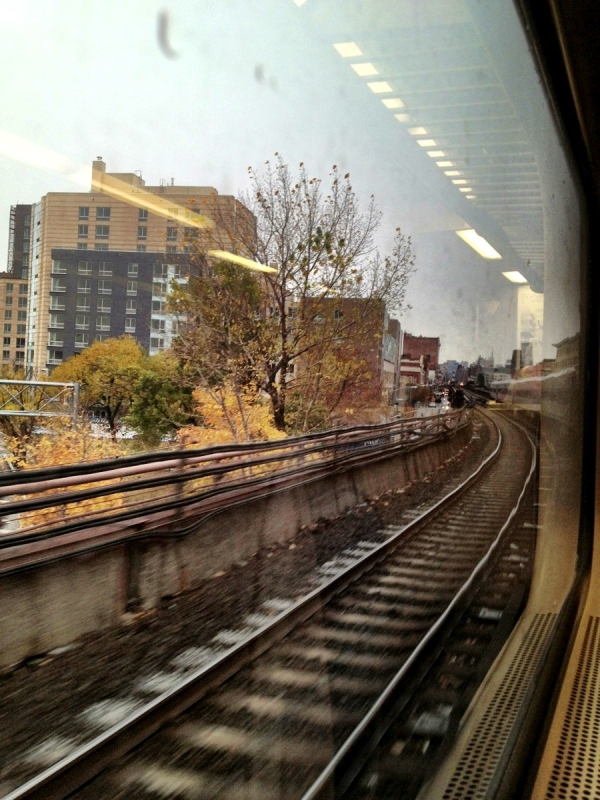 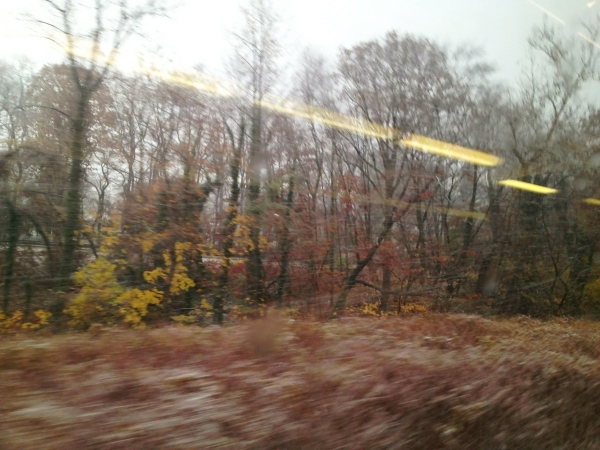 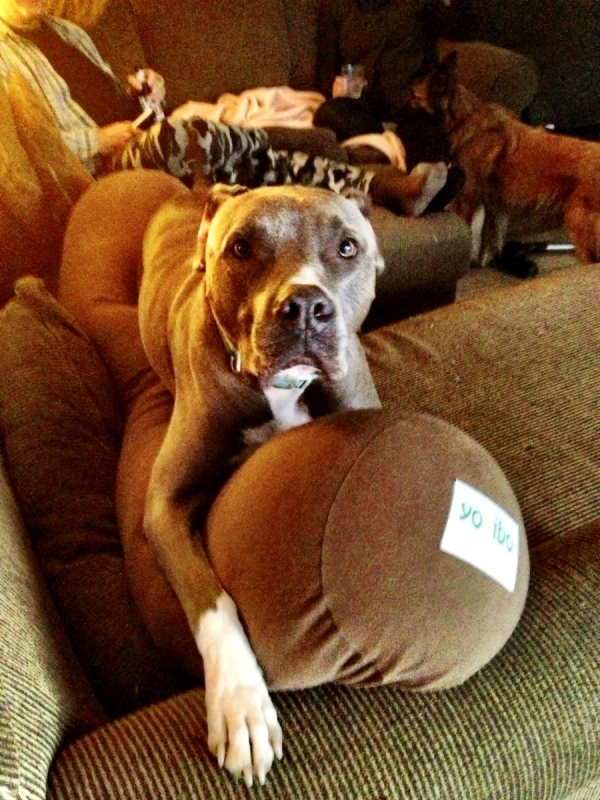 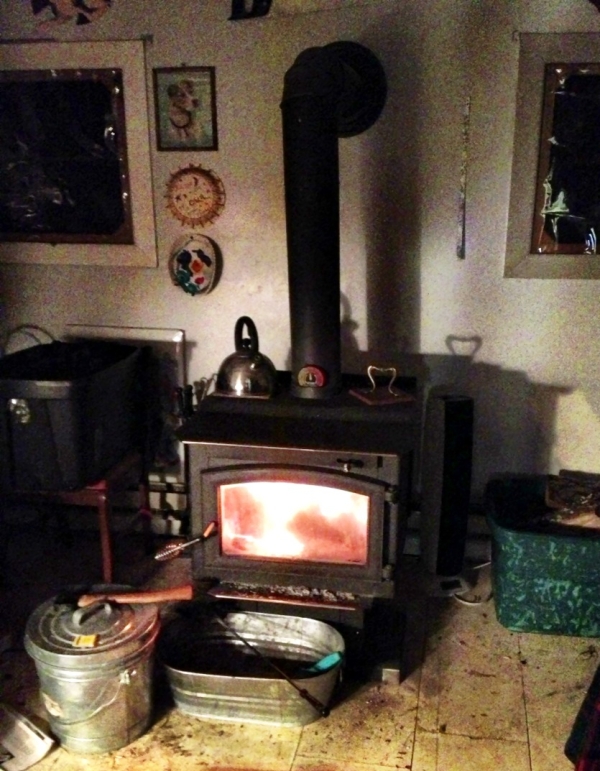 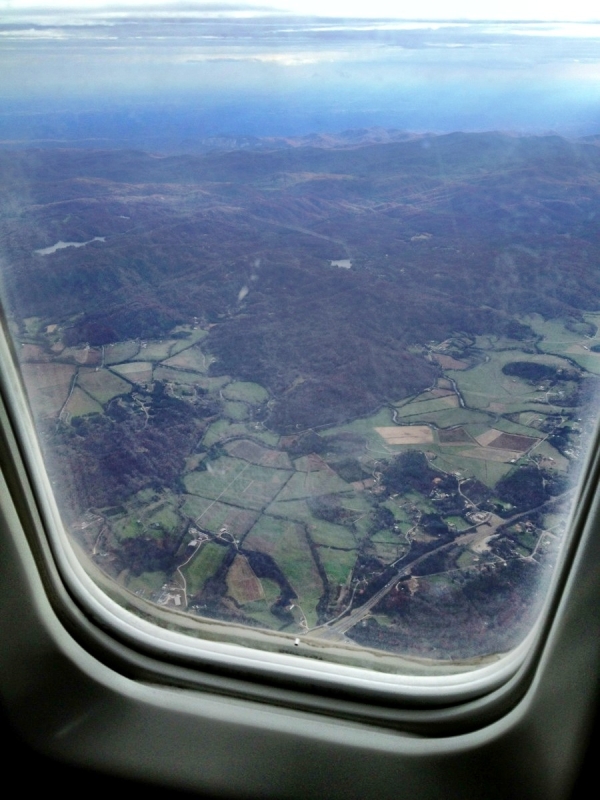 The large Painting hangs for the first time from the roof of the Nest ARTs Factory in Bridgeport, CT. 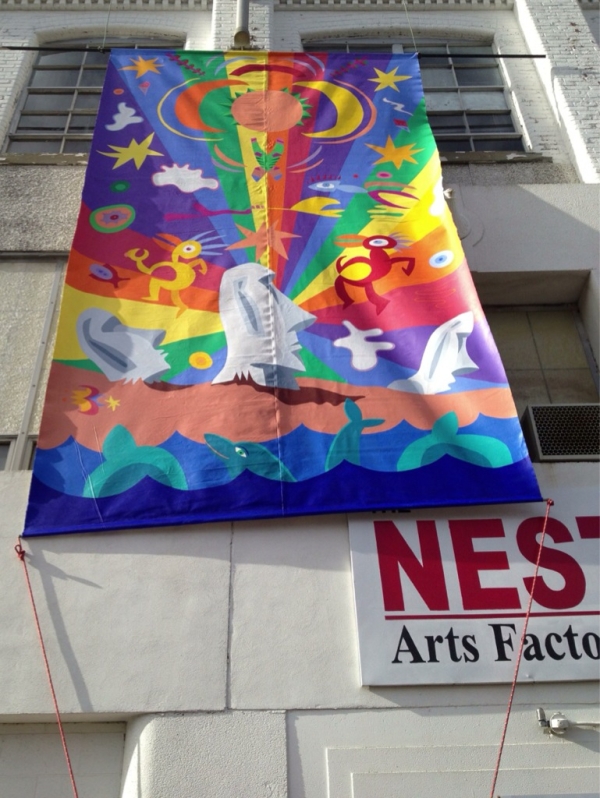 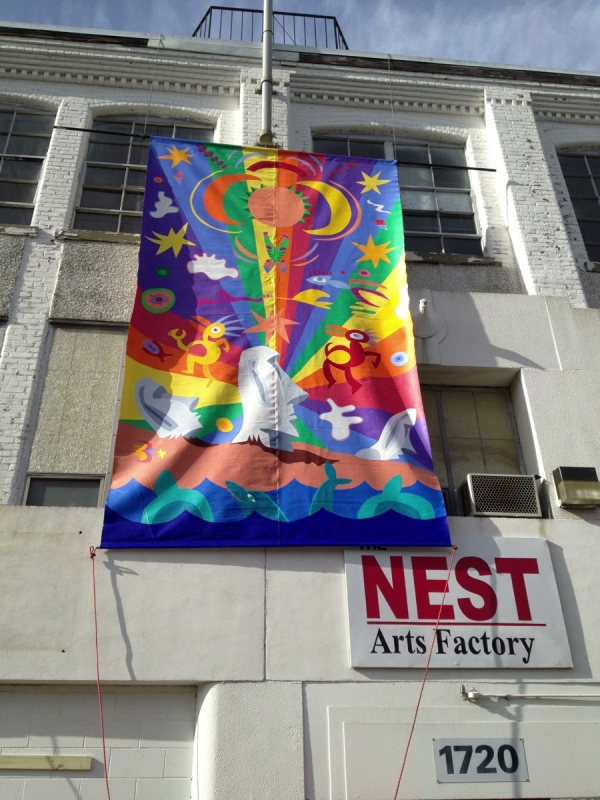 Saying things that have never been said isn’t always easy but sometimes those things just sprout from One’s mouth, like the Wings from the side of One’s head.

I had a crazy ride to the Airport in Asheville, NC, from my Friend and Colleague Robert Seven, the crazy part was that the traffic was bogged down in every direction going towards the Airport.If You’ve ever flown from Asheville, You might not anticipate this, unless it’s Friday evening at 5:30pm. I made it to the check-in with 7 minutes to spare, then I got on the plane and I flew, like a Sardine, down to Atlanta, Georgia and then successfully connected on a Flight to NYC, about 5 miles from where I got off the first plane. Then I made it to New York City, which is so incredibly dream-like at Night. I switched my seat voluntarily and got to see the City, which I wouldn’t have on the side I initially sat on. The second flight was also packed.

As soon as I got off the Plane and rearranged my items, which may have and really did shift during the flight, I called my Ride and the dispatcher said to go straight outside, where I was immediately met by Steve, who brought me speeding to Flavor Bay, where my Friends and Collaborators Meredith DiMenna and Mister Emil Nomel were awaiting my arrival and had a very yummy Chicken Dinner with Beets and Greens (Down-home Style) for me.

The next day was Saturday and I received a warm tongue wake-up from a large, grey, wiggly Dog named Milo at around 6:22am. I put another log on the fire and went back to bed but woke up again not long after that and We had a breakfast of hardboiled eggs and beets, then We went to Bridgeport, Connecticut to the Nest Arts Factory. We met up with Artist Relations Coordinator, David Flynn. David had rope and the knowledge of how to access the roof top and some Airplane clamps to use to keep the large painting from “bunching-up” in the middle of the large pipe that we used to suspend it from the roof of the Nest. Emil, David and I went up with all the stuff and successfully did hang the 10 foot by 17 foot painting over the side.

There is much more that went into that happening than I can accurately describe here (there was also a trip to an Awning shop for the Canvas, affectionately called “Ed” for Earliest Days, during which an actual seam was sewn in the bottom sleeve, that had been cut-off by me because the canvas was too long for the wall it was commissioned to hang on). So then We had a big adventure in Bridgeport, seeing Art and having a late Lunch-Eon at the Harborview Market. I had the Gabby-Melt.

We later practiced Our Song “the Earliest days of the Miracle Wave” in Meredith and John Torres’ (Oh, Cassius) Studio in the Arts Nest and also sang some other Songs. Later We had to do some extra lashing to the large Painting hanging on the front of the building, in order for it to make it through the Night, with the wind whipping and then We drove back up to Flavor Bay after attending a Dinner Party Birthday Party very close to the Nest. 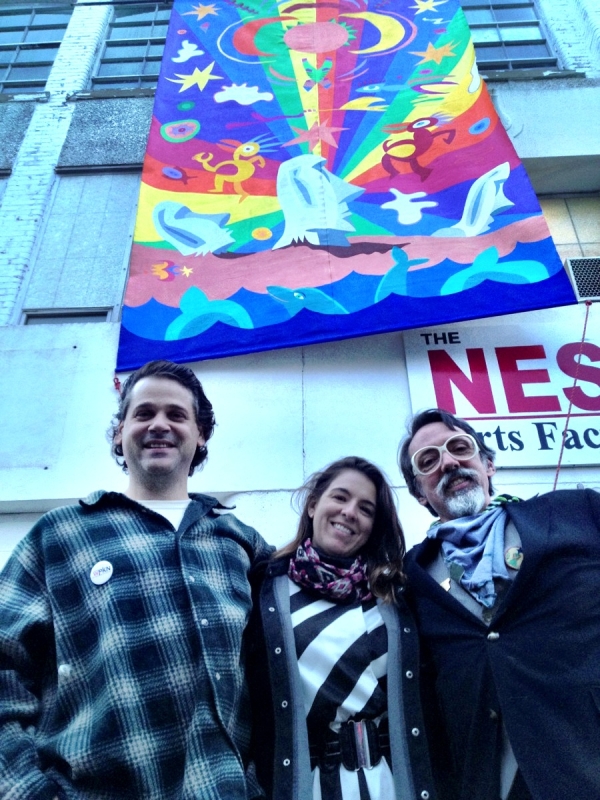 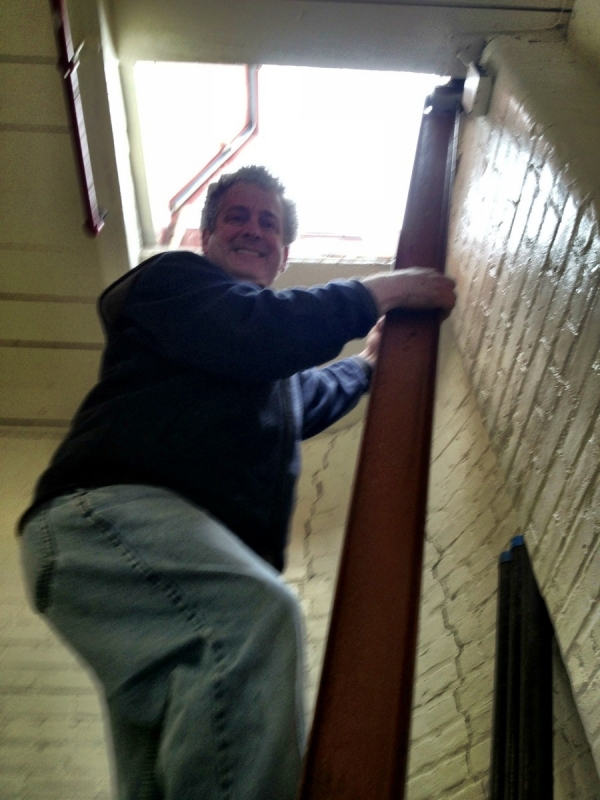 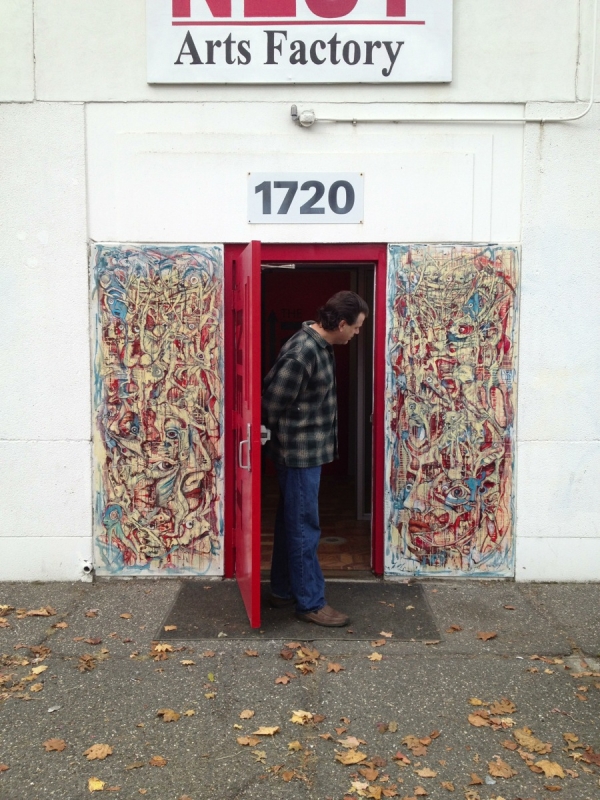 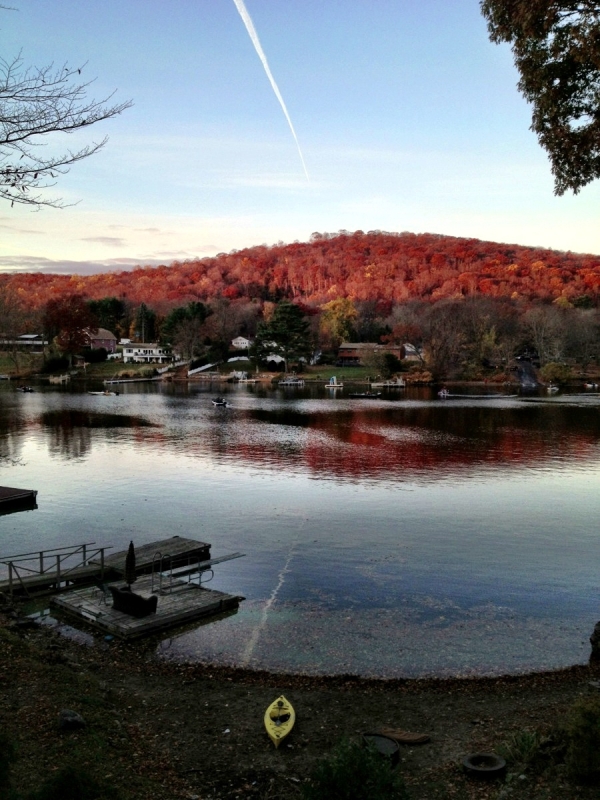 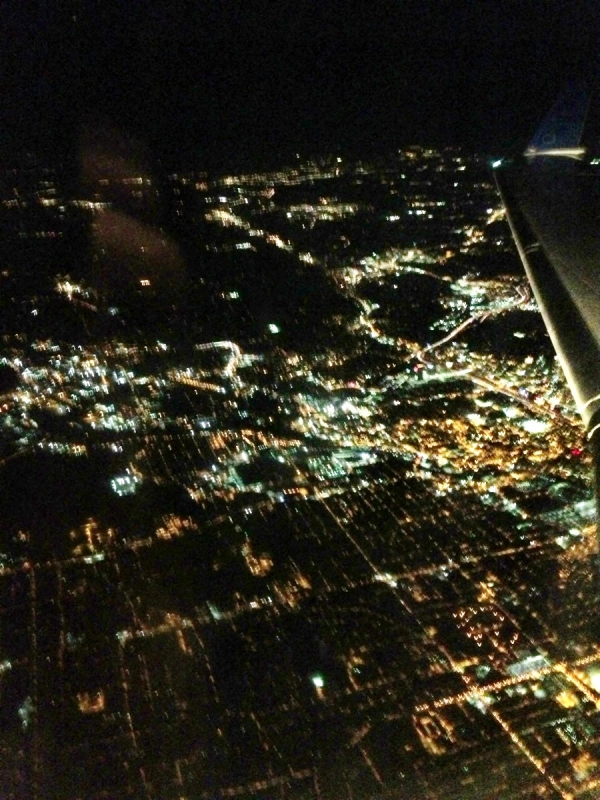 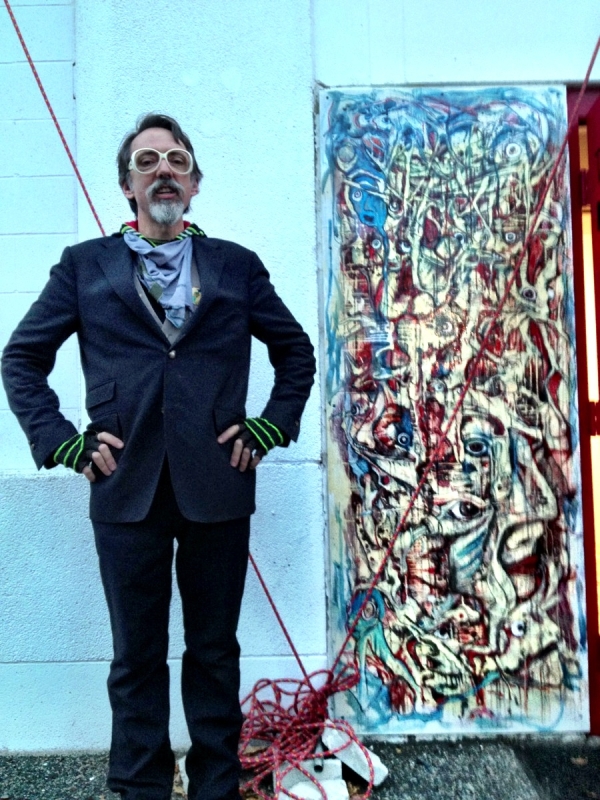 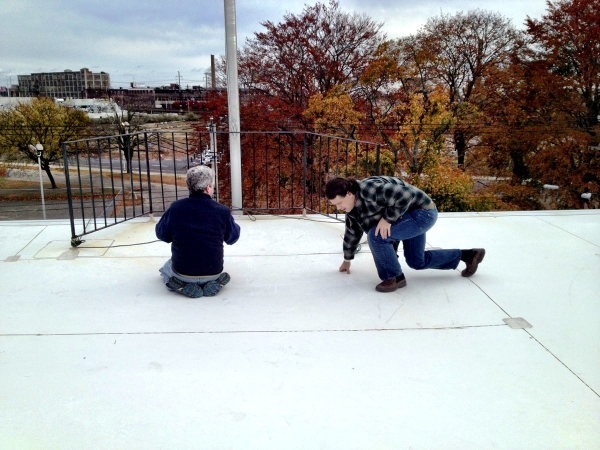 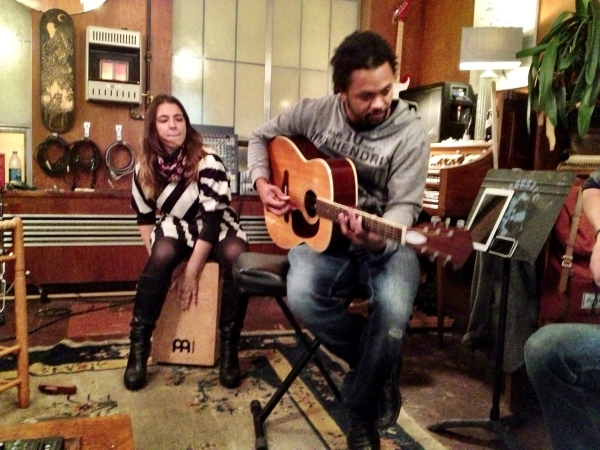 Today I leave for Connecticut to go back up to Nest Arts Factory and hang a giant painting from the top of the building. It’s been a weird Odyssey all the way, with, as Meredith Dimenna 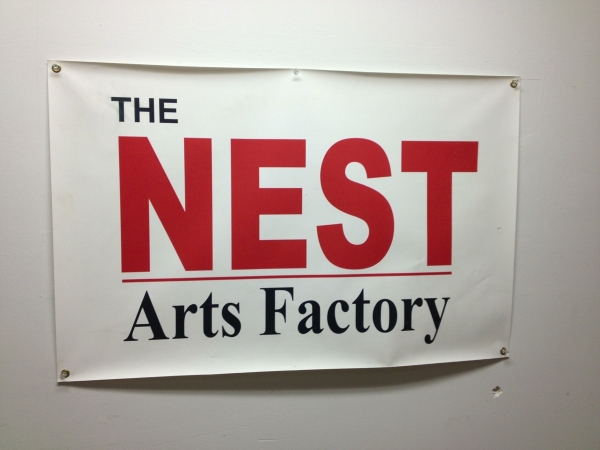 so aptly puts it “Many mini Miracles” every step of the way. To those of You who are reading this, from wherever You are, I say “ Ciao for Now!” and in the words of the Great Baby Gramps, “I’ll see Ya all of a Sudden!”

Thanks to Ami Worthen! Now You can enjoy some of My Sound Samples:

I made these mainly with an iPhone Application called “Songify”. It’s kind of a fancy modern sonic notepad. 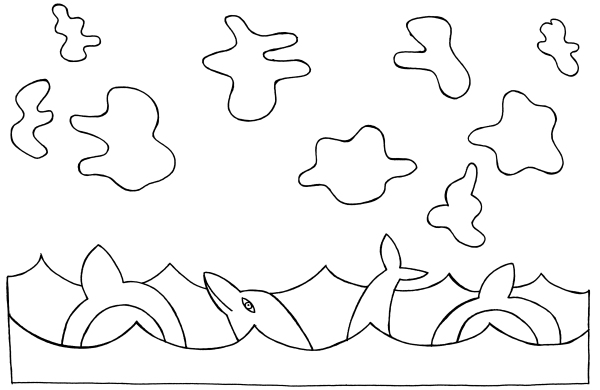 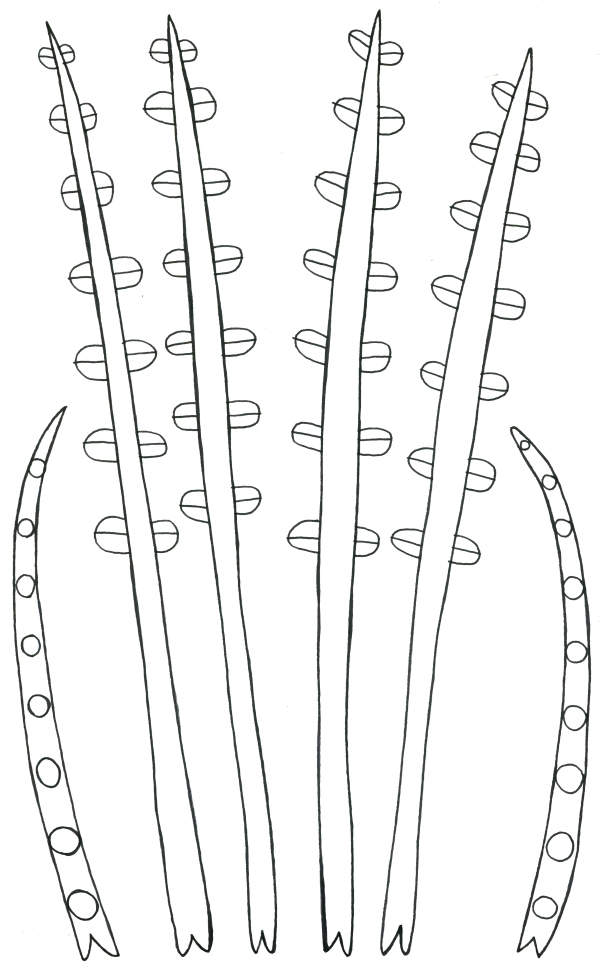 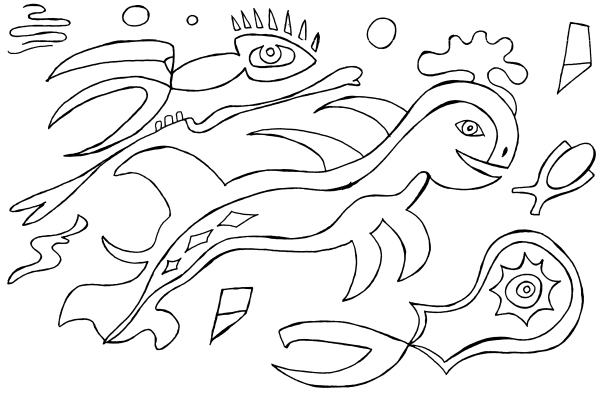 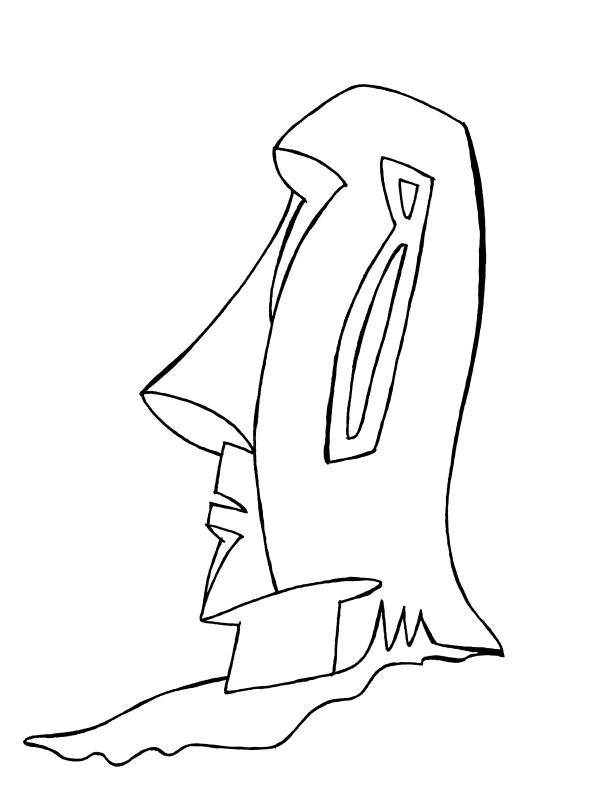 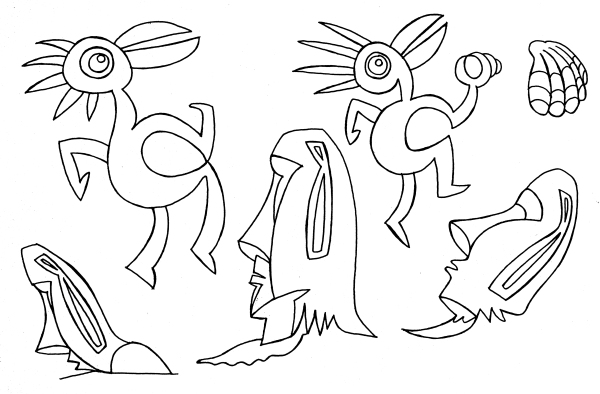 Aside from everything else that goes into making a giant Painting and a Multimedia Collaboration, and All the help from my Dear Family and Friends, there are many drawings that need to be made, to create the Image and the Color Study. Here are several pen and ink drawings that I made from sketches and old paintings. Then I scan them in to my computer system and convert them so that they can be easily arranged and I begin to build the image. It’s a lengthy process but one that makes it much more controllable for what I do. Of course, not all of these elements make it into the finished piece for various reasons but that leaves me with stuff to use in future works.

I love this stick work:
We will meet for drinks and dancing, around the swimming pool...
good morning from the Casa Hacienda, where the wind has stopped to blow after one week of non-stop windiness and the spoon cream needs a maelstrom in Your cup to blend in completely with the coffee (bean tea)! Buenos días!
a soothing few seconds of Caribbean (especially without the audio)