I have always wanted to come to Belize, for some reason it stood apart in the names of places I had heard of. I arrived here yesterday morning, landing at the Air-strip in Belize City after flying in low over the Western Carribean and super-lush jungle landscapes with dark green rivers winding through them,   similar to giant sunning snakes. Flying through the mist as We came to touch-down, the clouds made shadows on the emerald green water and I could see the paterns in the sand on the sea floor.

Out of the jungle, rapidly  came the runway and truly this is the tiniest airport, with People going up and down the ladders to get to and from three Jets parked on the tarmac, my heart does flips to experience this non-babylonian status. Off the plane in a hurry and down into the warmth of late Summer greeted by smiling Belezians, down to the far end of the Terminal (which rose singularly out of the jungle there), toward the Immigration Department and all the way back to the other end once inside (cattle-herding at its finest). The people in the Customs area appeared as though they had no idea a whole Jet-load of Folks would be arriving, there was a guy in one booth who had a computer completely disassembled and was wiping it off with paper towels, the Young Lady in the booth I was headed for was being very official and looking at Everyone’s passport as though it were some sort of magical object, when it came my turn, I was quickly processed, even at the second step, they only asked me one question then I was out the door and into a Taxi and off to the Bus Stop in about a minute, my Driver, Norevell, told me about crocodiles in the Old Belize River and how Belize adopted the “American” style of driving on the right, even though Belize was a British Colony prior to its independence in 1981 (which right now is the heart of the National celebratory status, that continues until September 21st). Soon We see a Bus approaching and Norevell flags it down and I am on there and on my way to Dangriga down the Southern Highway at a much faster speed than I have ever experienced on a school bus style of vehicle, packed with people, chickens, babies and all sorts of other stuff. I didn’t sleep so well the night before so I am nodding off and waking up periodocally as the bus vibrates like I would imagine an old-timey bomber airplane would with rumbling engines and road sounds to drown out almost even Your thought process. We pass through endless jungle greenery and more snakey rivers and distant misty hills rise up from the blue smoke of a fire. All along the route, quonset huts with balconies and stilt houses spring up by the roadside, in various states of repair. Finally We reach Dangriga, maybe 2 hours after getting on the Bus. They tell me they can’t stop to let me off at the Junction for Hopkins (my ultimate destination) because its an “express” bus and meanwhile they stop to pick-up and let off all kinds of people, including a Guy selling little bags of plantain chips with sauce squirted inside. At Dangriga, I wallow off the bus with my baggage and immediately meet Leonard who offers to shuttle me directly to my destination and after educating briefly on the surrounding area, He does just that. I bought Us each a water and we reached here in short order: Tipple Tree Beya, on the beach in Hopkins, Belize. 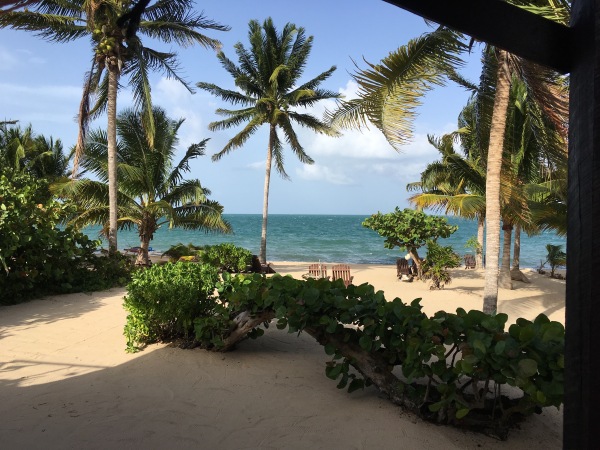 (submitted from my phone)

One thought on “Travels to Belize”