Biograffiti of Phil Cheney the Painter… 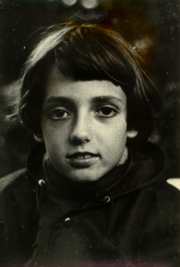 I was born in sunny South Florida in the mid-Spring of 1970. Bathed in warm yellow sunlight and stimulated by bright tropical colors, I would lie for hours in a hammock in the big backyard of my parents’ house, just taking it all in. It was there, at age two, that I first started-out drawing various garden bugs. My Mom, Pop and Grandmom drew garden variety bugs, as well. They encouraged me to draw and use my imagination from the get-go. I am an only child, so I spent a lot of time by myself, imagining things, writing stories, drawing pictures. My Mom, Judith Cheney, is a Painter, Illustrator and Naturalist. She had a cottage Art studio in our backyard where she would Paint. In order to keep me out of her hair, I was given endless art supplies. My Dad, Phil Cheney III owned a little sign shop where I was sent when the art supplies couldn’t pacify me any further. He was also an avid fisherman and many a morning we would wake before dawn to go fishing. We fished up and down the Florida coast, from the Inlets and Beaches of Palm Beach County to the Mangroves and Flats of the Keys.
My Grandmother, Catherine Hardin Moore, was a writer and poetess. She taught me to be “Thrifty” and best of all, how to make up stories. We collected sea-shells at the beach and sang songs together. She made me blue grapefruit juice (fresh-squeezed with Blue food coloring), peeled my hot dogs (I found out later that this was because she burned them) and made me eat peaches (also peeled) and cottage cheese. When I was 8 years old, my Mom and I went to Maine for the summer with some good friends of ours. I think it took us a week to get there from South Florida. The first night in Maine, we stayed in Port Clyde. We had delicious strawberry shortcake at the Inn, with fresh strawberries. My memory of this trip is like an old home movie being projected with a dim bulb. The next day we embarked aboard the “Laura B.” for a voyage to Monhegan Island. It was to be a prophetic trip. Once we were out a good ways at sea, I got up and moved forward along the railing towards the bow. I wanted to feel the sea-spray as we plowed the chill waters of that North Eastern Ocean and I have always liked to see where I was going.
Suddenly I felt strangely important, as if I were a great leader returning to my homeland, Victorious. As I look back, I think this feeling was a side-affect of having listened to the soundtrack album from “Camelot” a thousand times. I carried it with me everywhere I went. It was there on the “Laura B.” Then I heard a voice calling me across the water. A whisper on the wind, like a voice that wakes you from a deep sleep, and you swear you heard it but there’s nobody there. Its sweet, salty words tickled my ears. I got chills all over my body as I heard them say I would do something great in my lifetime. I think it was definitely one of those time/place situations but it has stayed with me always. In fact, I spent the greater part of my late teens and early twenties sitting inert, subconsciously waiting for more instructions that never came.
In fourth grade I presented my first Play, complete with illustrations. My favorite part of creating characters has always been drawing them, it brings them to life. The Play was entitled “The Nazerix: A Play A”. It was very inspired by a script I had of  Monty Python‘s “The Life of Brian” . My script was made up of recognizable words mixed in with total gibberish. It recalled a journey by a group of cousins called the Nazerix. They lived on a far Southern Island called the Sequoia Desert. Their quest was a simple one: to gather bread and salt for Winter. The Nazerix’ nemesis was a Toll-Booth Lady who could not be killed by bread alone and haunted them wherever they went. She used no words, only a sign which read: “Stop. Pay Toll.” In several attempts to kill her, they used up all of their bread and caused an innocent Bird to disappear. All they had to do was pay a nominal fee but they would rather resort to violence which spared no expense, including their precious food supply.

After reading this Play, my Grandmother, who had encouraged me in this direction in the first place, wanted to send me in for psychiatric evaluation. Instead I got chess lessons. I am very lucky that my Parents were patient, calm and understanding. When I was ten years old, we moved away from South Florida and up into the Blue Ridge Mountains of Western North Carolina. I had to leave behind my Grandmom and all of my friends. The North Carolina School System had little patience for Artistic children. My sunny warm yellow turned to chilly, dull brown. I went from deciphering hieroglyphics, writing plays and painting murals, to sitting in drab classrooms, where one couldn’t even chew gum and wearing multiple layers of clothing. I dealt with the change by turning to humor. This is when I started drawing Cartoons. I left the more serious Art of childhood, trains, dinosaurs and knights in armor behind, seemingly forever.

During High School and College, I worked on the student newspapers of various institutions as a Cartoonist. I continued to draw comic-strip style cartoons until I was 25. Then painting began to take over as my main artistic priority. Many of my post-collegiate years were spent in the food service industry, including a stint with a “Front of the House” catering company on the Lollapalooza ‘92 tour of America. It was during this tour that I caught the traveling bug and I haven’t been able to shake it since. Much of my Art and Humor is inspired by the experience of Travel. In 1996 I was working as a baker. Then fate intervened. It happened in the form of one Wesley Willis Winn. He appeared as if out of thin air. I was working at the Blue Moon Bakery in Asheville, NC and newly married (for the first time). Everything seemed to be “right” in my life when in walked Willis (aka “Woosel”). He was wearing high-water overalls, an engineer’s cap, Gandhi glasses and a long chin-beard (which he said he was growing for Halloween). He had just arrived in Asheville and he was homeless. His first words were: “My name is Willis. I’m here to wash dishes.” He was late. For a while, nobody really spoke to this strange new-comer. Behind his back everyone said, “Wha Choo talkin’ about, Willis?” I finally approached him after learning that he was a painter and also a fellow “lefty” (a person who is predominately Left-handed).
Woosel introduced me to a group of artistic musicians, “Snake oil Medicine Show”. There was an instantaneous connection between us all. By the summer of 1997, we were touring around the South Eastern United States together. In January of 1998, while on tour of Tennessee, Alabama, Florida, Louisiana and Georgia, I sealed my position as “on stage painter”. Snake Oil Medicine Show performed at Festival grounds, Auditoriums, Theaters and every dark, smoky, hole-in-the-wall bar in between. At each location we brought in Our original art and music.  At every show my paintings were displayed, in a kind of one-night-stand gallery, called “the Dynamic Art Gallerie”. I have since performed my Live Painting with several amazing bands, including Mad Tea Party, Hypnotic Clambake and A.V.A.S and well as with other Live Painters, Scramble Campbell and Frenchy.
I am so grateful to do art. It can be powerful and gigantic. It electrifies me and lifts me out of the mundanity of this life and up into the stars. Art is a HUGE part of my soul and of all souls if they let it be. It is a glimpse of everlasting Love and the path to nonconformity. I believe that the various forms of creativity, such as art and music, are the living voice of Love – that same voice that called to a young boy across an open sea all those years ago.
My strongest influences and Inspirations are: my Mom, the painter Judith Cheney, my Dad, Phil Cheney III, my Grand Parents, Kirk “Kink” Nelson, Woosel,  Ami Worthen and Jason Krekel, Bob Seven, Butch Anthony, C.M. Laster, Anita Lorraine Kinnney, Ralp the Sacred Painter, George Pond, Justyn Thompson, Paul Gauguin, Peter Max, my high school art teacher, Mark Phillips, Scramble Campbell, Frenchy, Peter Max and my close friends and family and the Asheville Arts Community.

the Prismatic motion: #shayberryscramble
without the side of doors:
Reflections are my favourite! @scramblecampbellart #thegoldenhour
I had a blast over the past thirteen days, they went by so fast and in some ways dreamlike, that I’m left in a daze, all ways! Thanks to, especially @carolinepond for these experiences. ❤️🎶✊🏼 and Super Trooper Dilly!